Mystery of the Masked Man

Every day, people stop and take a picture of the Masked Man. Sometimes dogs bark at him, other times, children crawl on him. Luckily he is very strong, but he is also very "old." The "masked man" is really the bronze sculpture that stands in front of the Harbor History Museum in Gig Harbor, Washington, holding a very large salmon. Like you and me, he wears a mask these days to protect himself and others from that pesky, contagious Coronavirus. But it hasn't always been so.

Before the days when Coronavirus threatened us all, "The Big Catch" sculpture stood silently in front of the Harbor History Museum. He's a remarkable, life-sized, six-and-a-half foot statue sculpted by Northwest artist Doug Granum and cast in bronze at 2 Ravens Studio in Tacoma. But even before he wore a mask, and before he became the face of the Museum, he was a mystery. People have asked whether he replicates one of Gig Harbor's fishermen. They want to know who he is and how he came to be. The answers, while still sprinkled with a splash of mystery, can be found in a photograph taken by the late, great photographer Asahel Curtis (1874-1941).

Asahel Curtis was the younger brother of Seattle photographer Edward Curtis, best known for his massive work The North American Indian. Asahel, an accomplished professional photographer as well, took his career in another direction, photographing the everyday natural world, marvels of industry, and workers around him. In addition to his many Mount Rainier "scenics," his work included jobs for industry clients such as railroads, fruit growers, and fisheries. He would visit the rail lines, orchards, and canneries to photograph the industry in action, relaying the wonders of bountiful orchards, impressive engines, and "hi-tech" canning equipment. One such photo shoot was done for Pacific American Fisheries in August, 1909.

On that late August day, photographer Asahel Curtis had no idea that the portrait he snapped of a cannery worker on the dock holding an 80-pound salmon would one day wind up cast in bronze. His was a time when fishermen were paid by the fish, rather than by the pound as they are now. So, it was not uncommon for fishermen to simply toss back any really large fish that wound up in their nets. The 1909 image that inspired artist Doug Granum, however, was not a typical fisherman. Instead, he was a cannery worker, thought by archivists to have been one of the men who unloaded boats and barges at a cannery in Bellingham, Washington. Curtis never noted exactly where the picture was taken or who the man was. He did, however, make note on the negative that the fish weighed 80 pounds, a "Big Catch" by any standard. The salmon the man holds is larger than most that made their way into the cannery gutting room. As a point of comparison, check out the salmon in the portrait below. This nameless young woman was also photographed by Curtis during a shoot at Apex cannery in 1913. What major differences can you see?

While the identity of the man in the original 1909 photograph remains a mystery, another photograph surfaced that provides an inspirational clue. 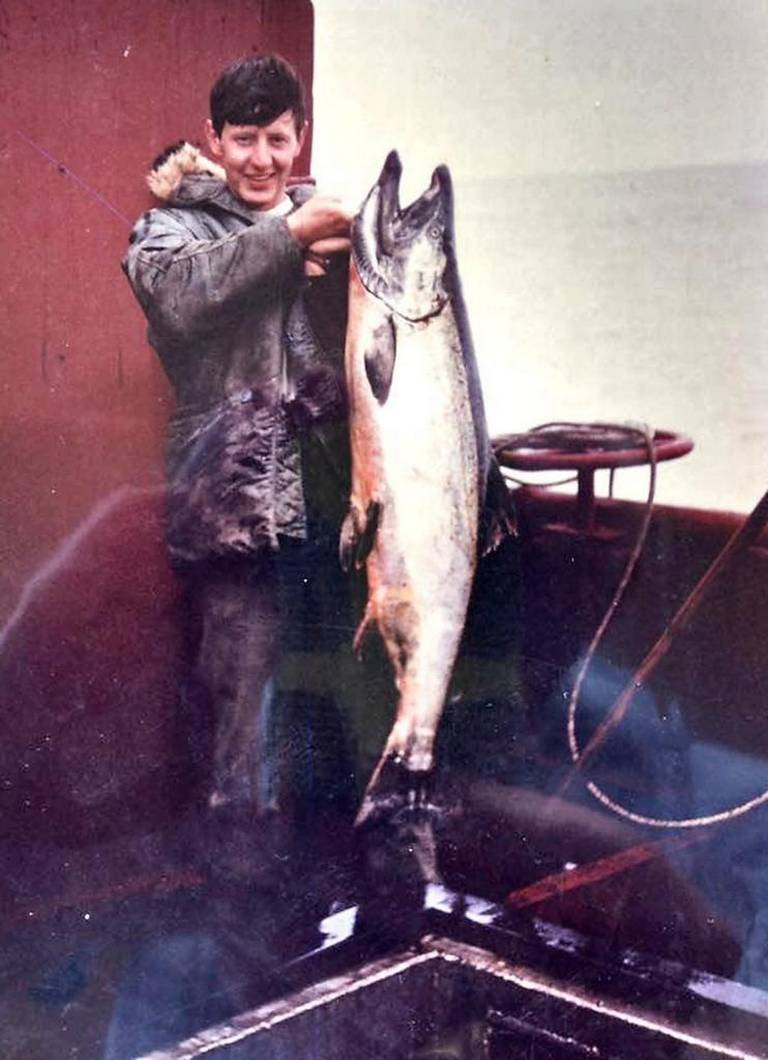 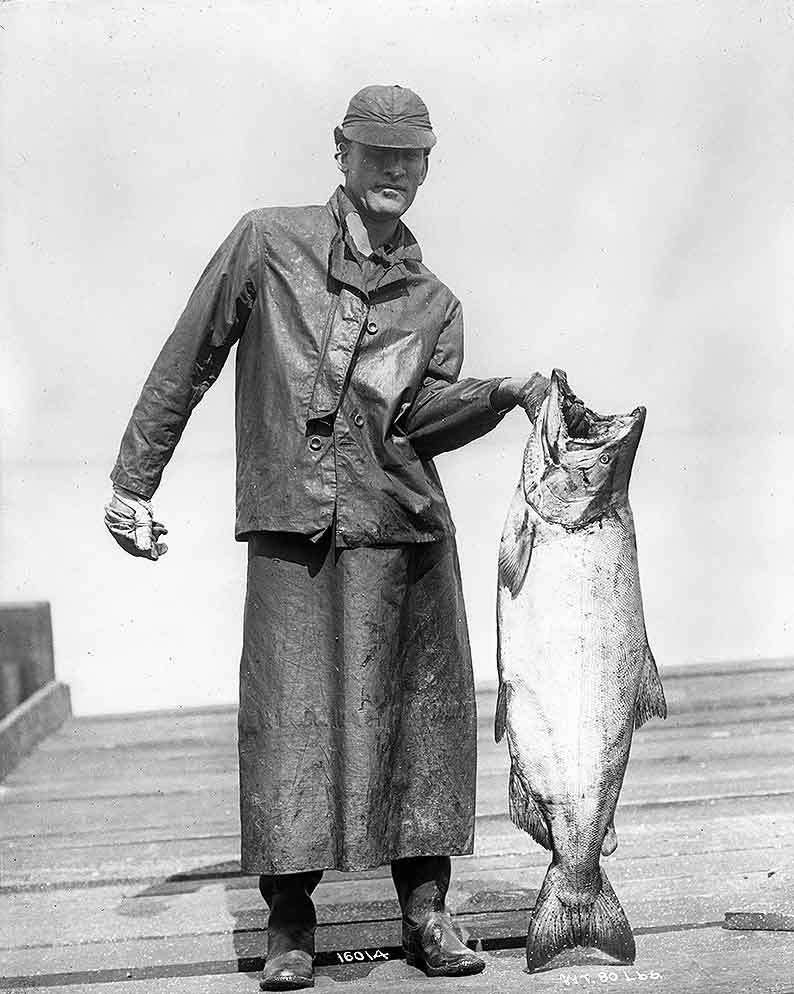 The fisherman in the left-hand photograph above is, in fact, the artist Doug Granum himself as a young man. No wonder the 1909 image struck such a chord with him. They practically look like twins.

Fast forward to 2013. Inspired by the Curtis photograph, Granum decided to sculpt a life-sized version of the 1909 cannery worker. An interested group of art and history lovers known as Citizens for the Big Catch, worked with the Greater Gig Harbor Community Foundation to rally around the project and raise the necessary funds to have the sculpture made and installed at the Harbor History Museum.

But creating a sculpture of this magnitude was no simple process. First a small study of the sculpture was created, then later the life-sized version. Sculpted from clay, the figure was then brought to 2 Ravens Foundry to be cast in bronze. You can watch the entire amazing process in this video made by Kris Crews.

As you can imagine, creating a work of art like this is no easy task. To create a three-dimensional sculpture from a two-dimensional historic photograph requires a deep knowledge of human (and salmon) anatomy, acute attention to detail (notice the subject's ear), and an incredible understanding of the bronze casting technique. This is a technique that dates as far back as 300-400 B.C. (2400+ years ago) when the Greeks were creating remarkable bronzes of the Classical period, many of which were copied by the Romans.

Originally envisioned for placement at the entrance to Gig Harbor's Maritime Pier, The Big Catch was designed to "serve as a tribute to the men and women who had their lives forged by the enduring culture of our Gig Harbor fishing community." With the sculpture's ultimate installation at the Harbor History Museum, that vision has come true. 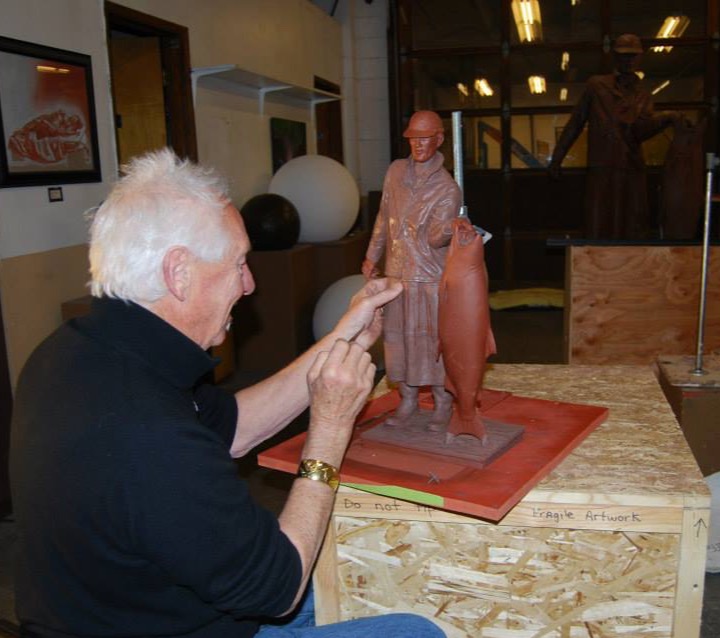 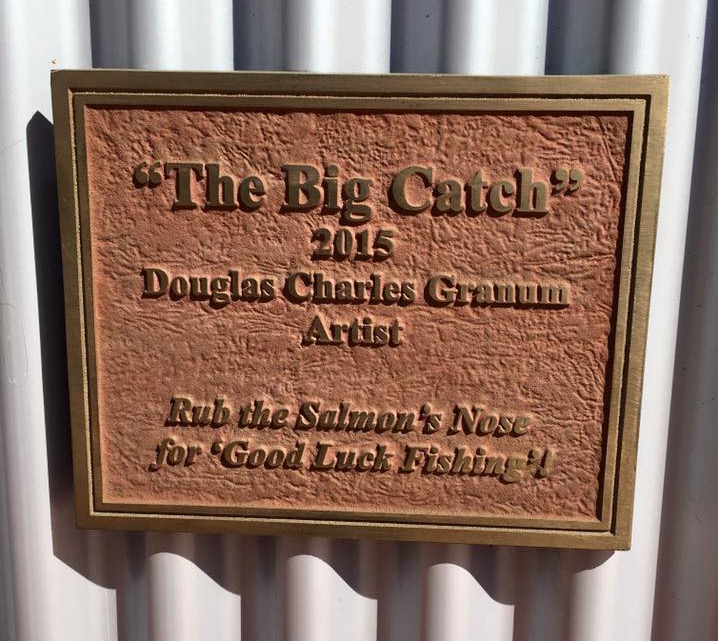 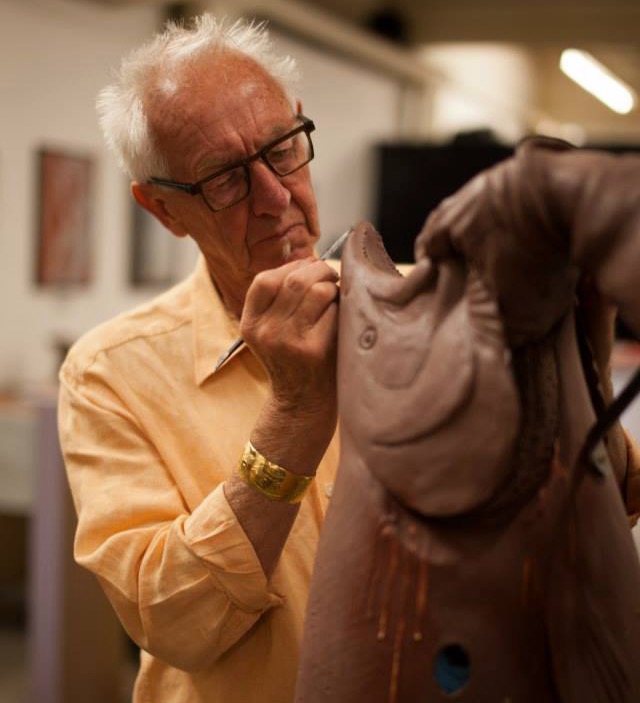 And although Gig Harbor was never home to a cannery like those that once dotted the Bellingham, Anacortes, and Alaska waterways, it has been home to its own fishing fleet for nearly 150 years. That fleet, and the lumber and boat building companies that helped make that fleet operative, forged the Gig Harbor we know today. Our fleet, no matter whether they fish the San Juan salmon banks or Alaskan waters, has been catching and selling to canneries throughout Washington and Alaska for generations. Maybe the 80-pound salmon the cannery man holds in his portrait came from a Gig Harbor boat. We'll never know for certain, but we do know that salmon have had a tremendous role in shaping who we are as a community. From commercial fishing to restoration of local salmon spawning grounds, Gig Harbor has strong ties to all this sculpture symbolizes.

Since being installed in July 2015, "The Big Catch" has become a new favorite of all who visit the Harbor History Museum. Have you had your picture taken with "The Big Catch"? If not, it's time. He's waiting for you, and that salmon is getting mighty heavy!

The Big Catch installed at the Harbor History Museum, pictured with the crew from 2 Ravens Studio and Foundry. These are the talented people who made the bronze cast from the artist's clay sculpture. See them at work in the above video.

Thoughts from the Artist

When an artist begins work, thoughts swirl and land in a form that provides inspiration, intelligence, and direction. This is an excerpt from Douglas Granum as he began work on "The Big Catch" and how he tied that thinking to Gig Harbor and the Harbor History Museum's 65-foot purse seiner, Shenandoah.

His apron is scratched and slimy, his shirt is tattered,

his hat is shinny from wear, his boots are ripped;

this man has lead a hard life.

His wrist is bent from the weight of the Salmon,

we want that represented.

This is the life of the fisherman. It is hard and

unyielding, this life on the sea where one is up before dawn,

laying out nets in all manner of wind rain and foul weather.

There are few places as hostile to we mere mortals

as the North Pacific Coast.

There are a thousand kinds of rain and seas each its own hell or heaven.

Standing in a heaving hold full of dead slimy and staring fish,

pushing them into a basket in the dead of night takes fortitude.

hanging on her anchor cable leaping from wave to wave,

our fisherman in the forecastle playing cribbage and eating hardtack while the North Pacific sweeps the black hull,

family and friends far away, an aching thumb, a throbbing ear, no sleep.

How do you factor that into the price of a can of Salmon?

Photograph of artist Douglas Granum as a young man. Tacoma News Tribune, "Larry LaRue: Who was the man with the salmon?" September 6, 2015. https://www.thenewstribune.com/news/local/news-columns-blogs/larry-larue/article34206561.html

Starving to Death or Fasting for a Cure? The Curious Case of "Starvation Heights"

The Mystery of the Boat that was Mistaken for a Submarine